It All Starts When Winter Precipitation Lands On The Roof. 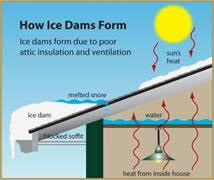 What causes an ice dam? Your roof has heat from inside the attic warming the exterior and the sun is emitting heat from the outside on the snow. This heat causes snow and ice to melt along the roof, running toward the gutters. Water runs out to the eaves, where the temperature naturally is cooler as the eaves hang out over the edge of the house, allowing for cold air on all sides. Winter temperatures often drop during the night, adding to the potential for ice along the eaves, also called ice dams.

Ice Dams Stop The Natural Flow Of Moisture Off The Roof.

The build up of ice along your roof keeps snowmelt and other moisture from leaving the roof along the proper channels. If you have a weak spot or leak on your roof or among your shingles, the melting snow may hit against the ice dams to back up into your roof or attic, causing water damage. Don’t underestimate the power of water at finding the tiny crevices and cracks on you roof that mean big problems over time or one heavy snow. Ice dams are symptomatic of potentially bigger problems.

Know What To Look For After Winter Weather.

Once ice has begun to form along the roof, you may see icicles or heavy ice and snow build up along the edge of the roof. Stand back from the house and get a look at the roof, noticing where the problem areas are. You may have snow guards to keep the winter precipitation from falling on your landscaping. Looking at differences in how the roof looks and if you have ice dams may give you further insight into what is working and places that might need some attention.

Record Winter Precipitation Build Up For A Targeted Solution.

Take pictures of the build up along the exterior of your home, giving you a guide for where to target your efforts to eliminate ice dams. Read more about the solutions to ice dams.

Snow guards in the Harrisonburg area

Has Valley Roofing & Exteriors done work for you?

Pipe flashing: How healthy is your roof?

Snow Guards: Is your roof prepared for winter?

Scroll to top
Write A Review!